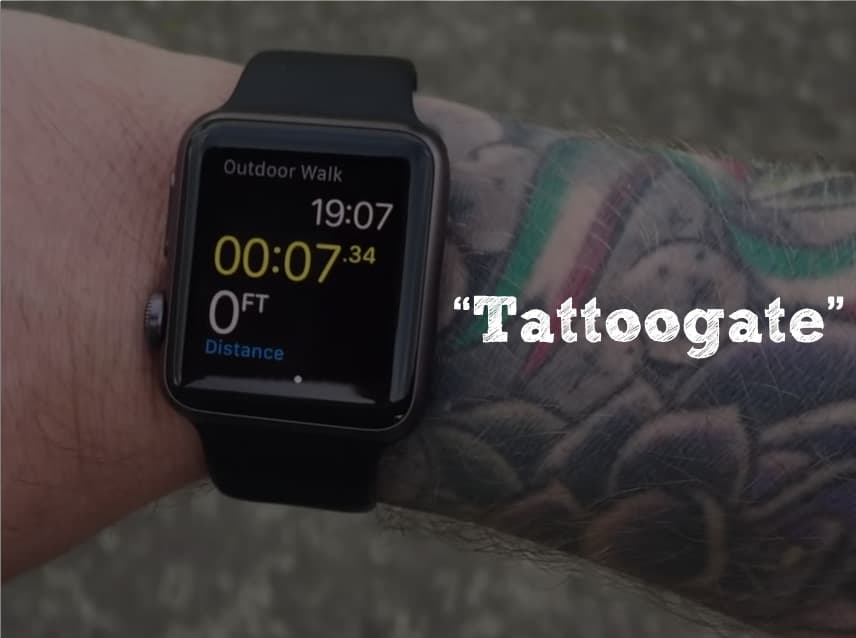 With any mass produced product, you can reasonably expect there to be a bad batch or two when those products go on sale. But what is less forgiving is when a product has a significant design flaw that’ll affect users of an entire generation. In the tech world, Apple is the best-publicised brand with regards to this. In 2010 we had “antenna-gate” and in 2014 we got “bend-gate”, two flaws that affected the iPhone 4 and iPhone 6S respectively. And now, it would seem, it’s the turn of the Apple Watch to have its very own “gate”.

The flaw is being dubbed “tattoo-gate” as users of the Apple Watch are experiencing problems with the Watch’s ability to detect a heart rate if they have a wrist tattoo. Users have reported that their Apple Watch loses connection if placed over a tattooed wrist and reports inaccurate heart rates. Not such of a big deal you might think, except the Watch’s software automatically locks the device and requests a PIN if it senses that it’s left the wrist.

And herein lies the issue; the Watch’s sensors cannot always tell whether or not a tattooed wrist is a wrist at all.

This video uploaded to YouTube by Michael Lovell demonstrates the issue:

As you can see, the issue is rather annoying. But it isn’t just the odd user who’s reporting this issue – iMore has backed up these claims by conducting its own tests, in which it found that tattoo ink can certainly wreak havoc with Apple Watches and that if your tattoo happens to be a solid, darker colour, you will be affected the most:

So there we have it – tattoo-gate is very real.

A scientific explanation as to why this is happening

The reason that the Apple Watch struggles to keep a connection on tattooed wrists is because its sensors use colour and various spectrums of light to detect heart rates. An unnatural pigmentation interferes with this process. And the darker the pigmentation, the more difficult it is for the sensors to function properly.

What is Apple going to do about it?

Apple invests hundreds of millions of dollars into research and development, and there’s absolutely no way that they didn’t already know about this issue prior to launch. Even the official Apple website states that “various factors may make it impossible to get any heart rate reading at all” and although it doesn’t specifically mention tattoos, it may as well do.

Realistically, the only thing Apple can do is release a software update. But this wouldn’t change the fact that the Watch’s sensors use a specific technology to detect heart rates. The software engineers at Apple may be able to do some wizardry to make this issue more bearable, but an all-out solution? That won’t be feasible until the Apple Watch 2.

So for now, inked Apple Watch users will have to wear the device on their other wrist. If both of your wrists are tattooed, you’ll either have to put up with it, seek a refund, or ask Apple to pay for your laser tattoo removal treatments. 😉