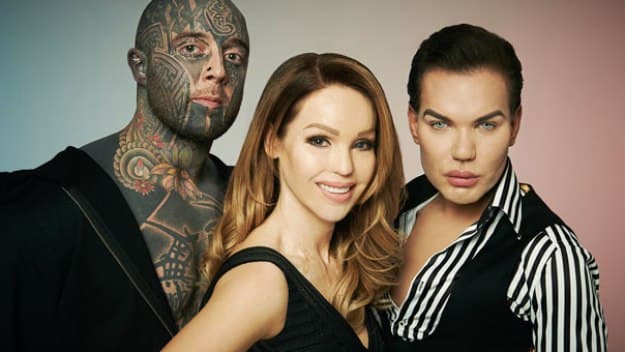 Great news for Bodyshockers fans; a third series of Bodyshockers: Nips, Tucks and Tattoos is in production!

The second series attracted an average audience of 1.9 million viewers per episode and a 7% share of the total TV audience – up almost 50% compared to the channel’s slot average. Discover how an interest in “tattoo removal” also soared.

Based on this success, a third series was requested by Channel 4 in February 2015:

“After a second successful series full of truly bodyshocking nips, tucks and tattoos from hell, I am intrigued to see the stories and people that Katie will be meeting in series three”, said Gill Wilson, Head of Features at Channel 4.

“We’re delighted that Channel 4 has ordered another series which promises to be bigger, bolder and weirder that before.”

It’s also great news for Andrea Catton Laser Clinic, who have been invited to feature in the show again. Similarly to the earlier series’, Andrea will have the PicoSure laser poised and ready to help those with regrettable tattoos.

The lovely Katie Piper will return to present the six new episodes later this year. We cannot wait!

Channel 4 are still looking for people to appear in the series.

If you’re interested in appearing or know a friend who could be interested, please read the information provided by Endemol below:

Do you regret a BIG, BOLD TATTOO, RADICAL SURGERY or an EXTREME BODY MODIFICATION?

Or maybe you’re the OPPOSITE and are planning on getting a MASSIVE TATTOO, EXTENSIVE COSMETIC SURGERY or a BODY MOD that’s going to make a REAL IMPACT?

Bodyshockers are looking for people seriously considering reversing body modifications including: tattoos, ear stretchers, tongue splitting, breast or pec implants or any other type of cosmetic work. We are also looking for people who really want to have these type of procedures or have extreme body mods that they’d like to show off.