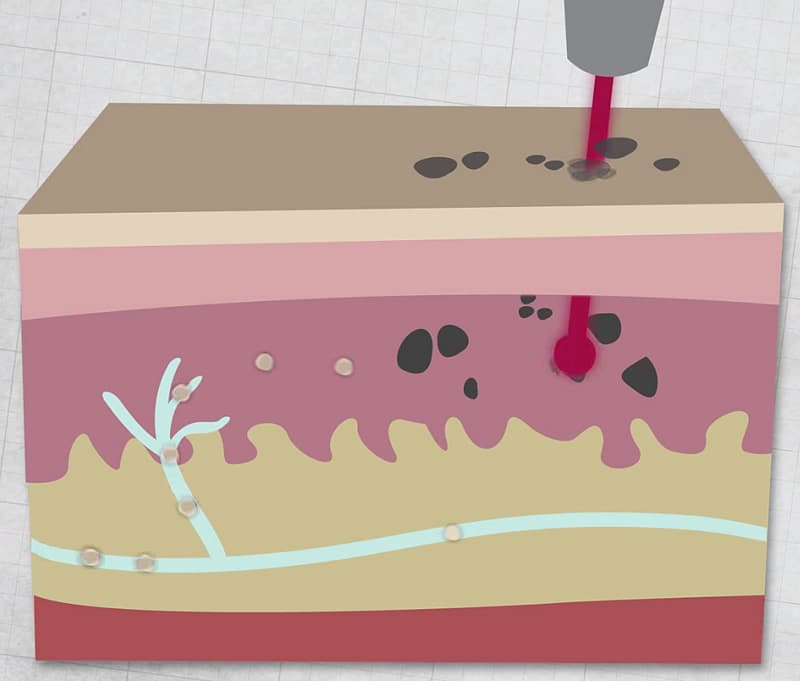 Did you know that laser tattoo removal involves science such as physics, chemistry, biology, thermodynamics and optics? Although this might sound complicated and complex, it is actually remarkably easy to understand when you break these processes down into simple and straightforward steps.

This is exactly what SmarterEveryDay has done with its “How Laser Tattoo Removal Works” video. Using this as a guide, we can explain the science behind laser tattoo removal.

How tattoo ink colours are made

First and foremost, let’s take a closer look at what the laser is actually attempting to remove. Tattoo ink might seem fairly innocuous, but the way it is made will probably come as a surprise.

The bright colours are created from compounds that mostly use heavy metal. For example, yellow can contain cadmium, chromium or lead, blue can contain copper or cobalt, while purple can contain manganese or aluminium salts.

In spite of their meticulously clean nature, which means no pathogens transfer, tattoo studios are effectively sterile environments that enable you to have heavy metals injected into your body.

How tattoos are inked into the skin

When you get a tattoo, multiple needles puncture your skin, which drags both big and small particles of ink through the epidermis into the dermis. However, this doesn’t mean to say your body is entirely happy with the procedure.

Your immune system will recognise that a foreign substance has penetrated your skin and will send white blood cells to come and deal with this threat. But seeing as the particles of ink are rather sizeable compared to the small white blood cells, they do not get broken down or removed.

Consequently, tattoos stay put as a permanent fixture. The reason why they fade is because white blood cells will still eat away at smaller bits of pigment and carry these away through the lymphatic channels of your skin, towards the liver and out of your body.

How lasers shatter the ink

Now that we understand how tattoos fade, it is possible to devise a way to remove them. Creating bigger white blood cells isn’t an option, so instead lasers attempt to break down bigger ink particles into more manageable chunks.

Lasers work by shining an intense heat on one side of the ink, which happens fast enough for only that part of the particle to grow through thermal expansion. The other side remains cool, which causes internal stresses and means the particle falls apart.

Essentially, it is a waiting game. But the faster you can heat up one side relative to the other, the more likely you can rip apart the ink. The more exposure time, the more tissue you effect. However, smaller and localised exposure can lead to a much more effective removal process. This is what laser removal machines do.

How the ink is removed from the body

After the laser’s short light pulses penetrate the top layers of skin, these wave lengths are absorbed by the ink and the ink is broken down. The body’s immune system targets these fragmented particles of ink and destroys them. The immune system uses macrophages – special white blood cells that digest foreign bodies – to achieve this. Macrophages are extremely efficient at engulfing and digesting foreign substances and over time, they will remove all ink from the body that’s been fragmented by laser treatment. This is how ink is removed from the body.

How the PicoSure laser works

Ultra short pulse lasers are used for tattoo removals, which operate at the picosecond level. Take a decimal point, add eleven zeros then a numerical digit and you’ve got the super-quick speed of picoseconds.

A modern laser, such as our PicoSure machine, is tuneable within a narrow frequency range, typically between 500 and 750 nanometres. This allows for treatment of the full colour spectrum of tattoo inks including red, orange, and yellow.

As you can see on the video, treatment with a laser results in what is called frosting, a shockwave at the particle level. This usually lasts up to 20 minutes after the treatment, not seconds as stated in the video.

Having a tattoo removed

Owing to the fact that lasers operating at the picosecond level shatter ink incredibly effectively, you will need fewer treatment sessions compared to other types of machine. However, a lot will depend on the type and size of your tattoo.

A large professional tattoo will require more, longer sessions than a smaller amateur piece of ink. To find out how many treatment sessions your tattoo could take to remove, get in contact with Andrea Catton today.