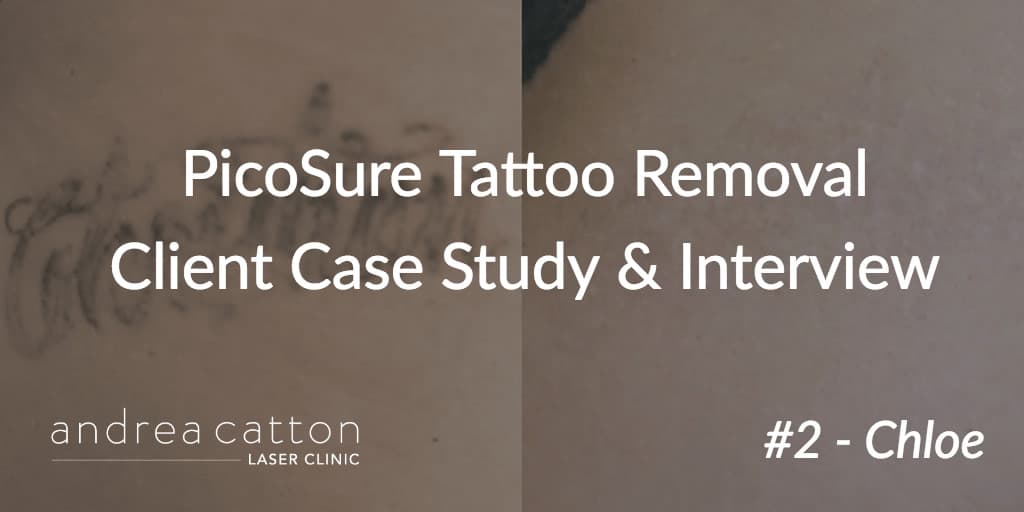 Chloe came to us wanting tattoos removing from her lower back and thigh with the PicoSure laser. Like Melanie in our first client case study, Chloe had her tattoos when she was younger and began to regret them around a year later.

In total, Chloe had four treatments with the PicoSure laser and her results can be seen in the photo below. 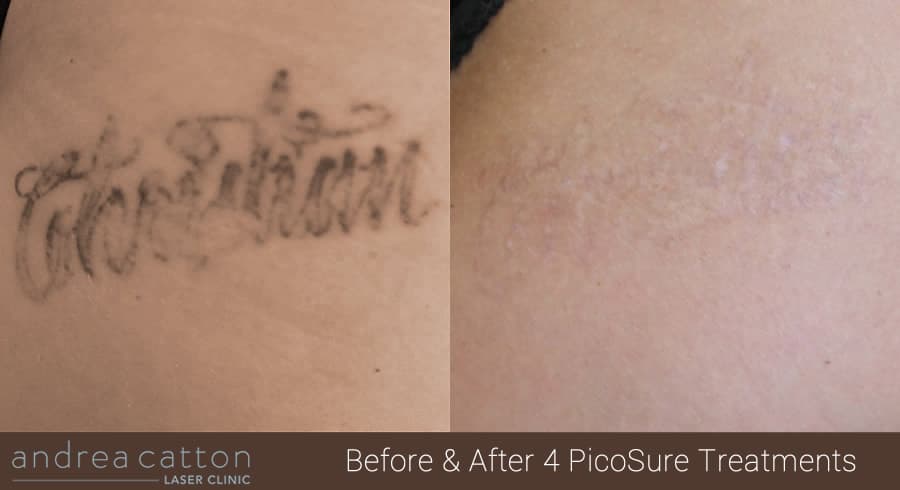 [View our PicoSure Tattoo Removal Before and After Gallery here]

We caught up with Chloe to talk about her tattoo removal experience with us.

Let’s start at the beginning. What was the reason for getting your tattoo in the first place?

“I was only a teenager when I had the tattoo done and unfortunately it was one of those mistakes that you make when you’re young!

Initially I had a very small tattoo on my lower back, which I disliked and wanted covering up. The cover up tattoo I ended up getting was much bigger and although I was pleased with it back at the time, it eventually became (and still is) my biggest regret.”

What was the reason for wanting your tattoo removed?

“I came to regret the tattoo after a couple of years and quickly grew it hate it! it was very big and ugly and just a poorly done tattoo. As I got older I became embarrassed of it when on holiday and never wanted to let anybody see it. I could never wear backless dresses when going out and decided to start looking into having it removed.”

And when did you first start to think this?

“Around a year after I had it.”

What attracted you to the PicoSure laser over other available removal treatments?

“I had already had a couple of sessions with a traditional laser when I was watching a programme about tattoo removals. I was surprised when the narrator said that the tattoos would need around 3-4 treatments when I had been told more like 10-12 treatments.

I researched online and found that it was the PicoSure that had been used on the TV programme and after researching some more I found that Andrea Catton was the only clinic with a PicoSure in the north of the country. I had a look at  the Andreas Catton website and was really impressed with the pictures of the results from the PicoSure and decided to go ahead and book in for a  treatment.”

What worries (if any) did you have prior to the treatment?

“I was slightly worried that it would be a lot more painful than a traditional laser with it being much more effective,however I found out this wasn’t true.”

And how was your first treatment?

“My first treatment was fine. As soon as I met Andrea I felt relaxed and she put me at ease straight away by saying it was no more painful than the traditional laser that I had already had.

I was given an ice pack and the skin was cooled prior to the treatment. Once the PicoSure was on Andrea said that if at any time I needed to take a break to let her know and she would stop the machine.

After around 15 minutes the treatment was over and the tattoo was covered up, as it is a little sore afterwards but nothing too uncomfortable.”

How comfortable did you find the laser treatment (the actual sensation from the laser) and what did it compare to?

“The treatment wasn’t as painful as I expected. The first few minutes were the most painful and as you don’t know what to expect but I think after a while you get used to it.

I would say it is a ‘hot’ sensation and would compare it to tiny elastic bands being flicked at the skin.”

Were you satisfied with the results and would you recommend the PicoSure laser treatment to your friends?

“Very satisfied and I would definitely recommend to anybody wanting to remove tattoos as quickly as possible. It is certainly worth the extra cost for the time it saves you!”

Any other thoughts, comments?

“I would just like to say a big thank you to Andrea for making me feel as comfortable as possible during my treatments. Andrea is friendly and professional and I would recommend her to anybody interested in having the treatment. I am definitely glad that I travelled to her clinic!”

Thanks to Chloe for taking the time out to answer those questions and for sharing her laser tattoo removal experience with us all.

For more information on PicoSure visit our PicoSure web page or request a call back and one of our advisors will be happy to answer any questions you have.