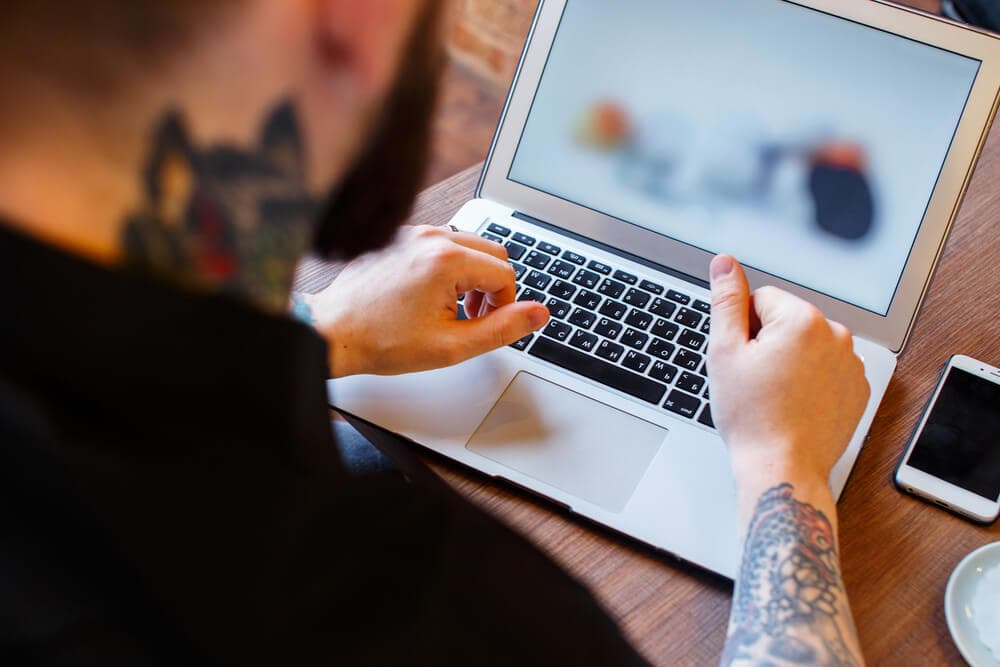 Can a Tattoo Still Affect Your Job Prospects?

According to research by the British Association of Dermatologists, one in five UK adults now has a tattoo, and that number is showing no sign of shrinking, with body art now having unprecedented popularity amongst young people. Yet attitudes to tattoos in the workplace are, in many cases, not keeping up with the trend. Here we look at the differing attitudes to expressive ink in work environments, and whether or not having a tattoo can actually affect your job prospects and career progression.

Research by internet recruitment agency CV-Library suggests that, while up to 44% of the UK workforce admits to having tattoos, visible or otherwise, 59% believe they will face slower career progression as a result. The University of St Andrews recently compiled a study in an attempt to find out why that should be the case.

The results reveal that prejudice against tattoos is less likely to be linked to the attitudes of hiring managers than it is to their perceptions of customer attitudes. Some top level managers surveyed revealed that they themselves had tattoos which they kept hidden in the workplace, and most were unconcerned about tattoos that could easily be covered with clothing, but would be reluctant to hire a candidate whose tattoo could be seen.

“Respondents expressed concern that visibly tattooed workers may be perceived by customers to be ‘abhorrent’, ‘repugnant’, ‘unsavoury’ and ‘untidy’,” explained Dr Andrew Timming, of the university’s School of Management who conducted the survey. “It was surmised that customers might project a negative service experience based on stereotypes that tattooed people are thugs and druggies.”

This perception is borne out by the real-life experience of 20-year-old Amii Parr, from Reading, who recently spoke to the BBC about the abuse she suffered from a customer at the mobile phone store where she worked, as a result of her tattoos. “They were saying I was disgusting and I’d let down the company,” she says. “I went round the back and cried. I have had awards for my customer service… I’m not rude or horrible. I don’t do drugs or anything. I work hard, pay bills, do charity work for animals and yet they call me disgusting names for no reason.”

While this prejudice based on appearance may seem outdated to many these days, it evidently applies more in certain industries than in others. The University of St Andrews survey also revealed that within creative industries such as the media, tattoos are commonplace and can even be seen as positive, as they are related to individuality of thought and creative expression. However, those industries demanding a more traditional image, such as banking and accountancy, expressed the most concern about what their customers might think of tattooed employees, and therefore would be unlikely to hire anyone with a visible tattoo.

Some industries have gone even further in the campaign against tattoos, such as the Metropolitan Police, who in 2010 banned all employees from getting any visible tattoos, and demanded that any existing ones must be registered. They took this decision, they said, on the grounds that they felt tattoos were associated with criminals and therefore undermined the authority of the police force.

However, the opposite attitude was expressed by those recruiting prison officers. In this career, visible tattoos are thought to be advantageous, as they create a talking point and a connection with the prisoners.

According to the St Andrews study, certain visible tattoos are deemed more acceptable than others. While many companies would permit a small, innocuous design such as a flower or a butterfly in a discreet place on the body, other body art would make a candidate practically unemployable across the board. Tattoos most employers would not even consider include a spider’s web on the neck, teardrops on the face, or any imagery relating to sexual acts or violence. Racist symbols are naturally unacceptable just about everywhere. In addition, some employers expressed reluctance to consider a candidate decorated with football-related imagery, due to the connotations of hooliganism. 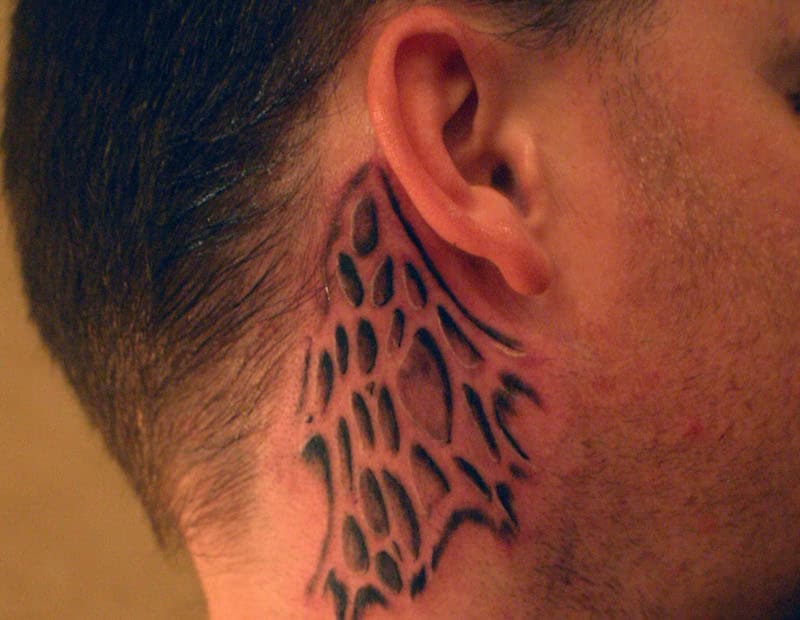 Interestingly, however, some employers thought certain tattoos could convey a positive image. For example, a tattoo of a regimental badge from a previous career in the military could suggest dedication and loyalty.

One recommendation the St Andrews study makes is that while it may be tempting to cover up a usually visible tattoo for a job interview, doing so is a mistake. Prospective employers want to see honesty, and while company attitudes to tattoos may vary, attitudes to deception do not. Current workplace equality laws in the UK do not cover tattoos, except those pertaining to religious beliefs, which must be proven and come under a different law. Therefore it is still legal for a company to reject or fire a candidate or employee because of a visible tattoo. Management consultant Jo Perkins recently discovered this to her detriment. The 38-year-old, who was not in a customer-facing role and has years of experience under her belt, was fired when her employers noticed a small tattoo of a butterfly on her foot, as the company had a strict no-tattoo policy. 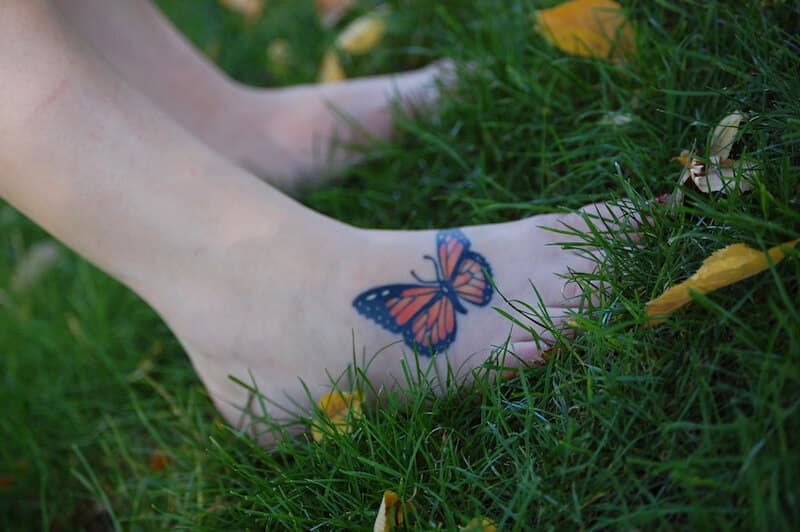 Claire Shepherd was also dismissed as a result of her body art. Having landed her dream job, she was fired after just 30 minutes, when a tattoo on her hand was noticed. She was later reinstated, however, after a social media outcry. Shepherd believes that by discriminating against workers with tattoos, companies “could be doing themselves a disservice and missing out on creatively thinking people. People really think about their tattoos and don’t just get one on a whim. If they can apply that thinking to something personal, what’s to say they can’t apply that in a professional setting?”

While the law on tattoos is likely to have to change in the future due to the sheer numbers of young people with tattoos, as it stands it is well worth finding out a company’s policy on body decoration before applying for a job.

Some companies are already taking note of the shift in culture and becoming more open-minded about employing those with tattoos. Hilary Jones, Ethics Director for cosmetics company Lush, already had tattoos when she was accepted for the company back in 1995. She says of Lush, “We don’t have an appearance policy. We’ve never been prejudiced against anything.”

Lush, who famously also employed a candidate with 25 facial piercings, is one of a growing number of companies who are perceived as “tattoo-friendly”, along with names such as Ikea and Google. It would seem that this policy has no negative impact on Lush’s customer experience, as in 2015 it was voted in first place out of 100 high street stores for customer service.

Even the Army has relaxed its policy on visible tattoos in recent years. While all candidates whose ink could be seen used to be automatically rejected, in 2014 they changed this ruling, decreeing that tattoos on the hands or the back of the neck are acceptable as long as they are of a non-offensive nature. However, a tattoo visible on a passport photograph would still result in a rejection. 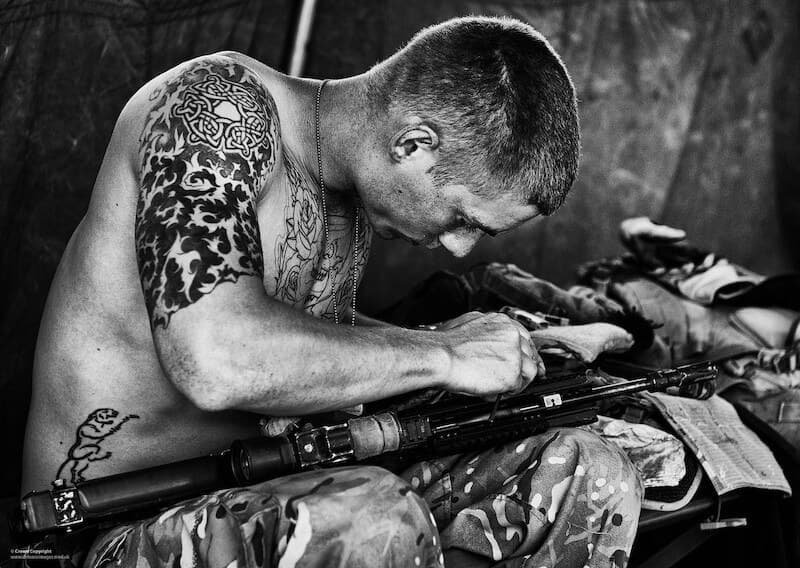 In spite of this slow relaxation of workplace attitudes, however, 15% of those surveyed by CV-Library still reported that they had been made to feel uncomfortable at work as a result of their tattoos, and most employers would still prefer a candidate without them. The Graduate Recruitment Bureau recently expressed the viewpoint that, “In the more corporate world, if there were two candidates in the running for a job and there was absolutely no difference in the candidates’ skills/abilities, resulting in the choice purely being based on presentation, most employers would pick the candidate without tattoos.”

While workplace attitudes to tattoos are likely to have to change fairly quickly in order for the UK workforce to be able to replenish itself, as things stand, all current findings suggest that within most non-creative industries, having a tattoo can still be a limitation on career prospects. A recent YouGov survey revealed that 86% of those with tattoos do not regret them.

However, their perception as unsuitable in most industries, and the discrimination facing those with visible tattoos, is causing more and more people to seek laser tattoo removal. While for some this may seem like a drastic step, for others the desire to progress within their chosen career simply outweighs their fondness for body art. It is a personal choice, but until legislation and workplace attitudes change, the option of restoring the skin to its natural state is a valuable one.