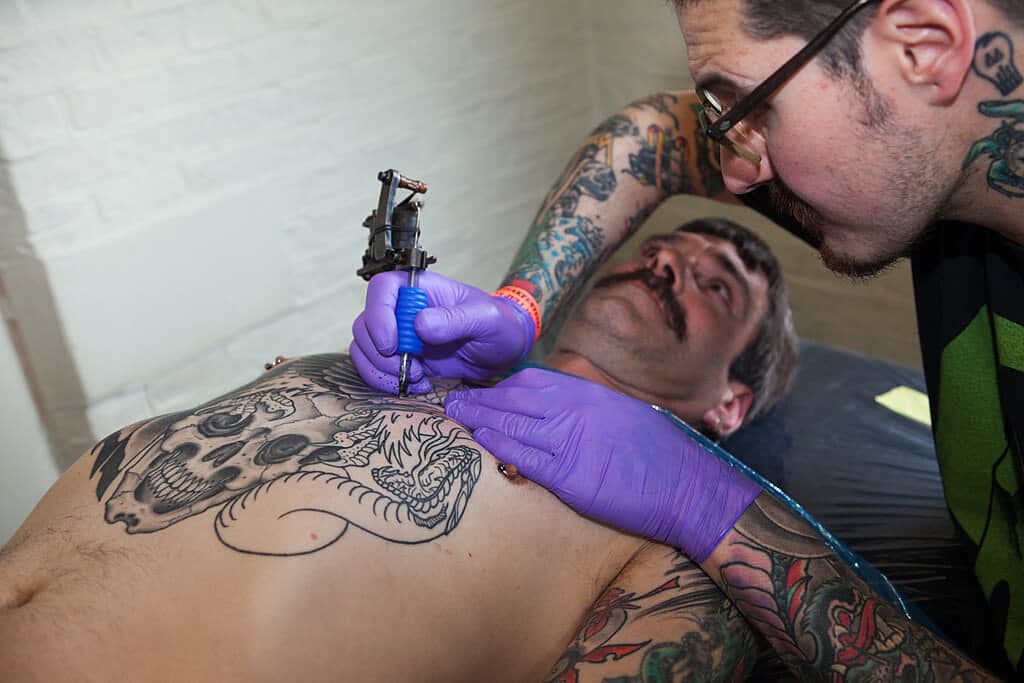 Who Owns Your Tattoos? Tattoos and UK Copyright Law

Your tattoo is a part of you. It’s a part of your sense of identity, as you chose it and its position on your body to represent something about who you are. But do you actually own it, or could this very personal part of you in fact belong to someone else?

This is subject to a great deal of recent debate as a result of a couple of high-profile cases involving celebrities, their tattoo artists, and third parties the celebrities were contracted to. The tattoo artists claim that showing the image of their tattoo without permission, such as if a celebrity appears in an advertising campaign or video game, is actually infringement of copyright. So let’s take a look at the law and what it could mean for you and your tattoo.

Copyright is the legal right of the person who created something to decide how it is used or reproduced. There is very little legal precedent surrounding tattoos; however, if we assume it is the same as all other types of artwork, then the person who designed the tattoo owns the copyright, unless they agree to sell or give the rights away.

Even if your tattoo is unique, if you did not design it, the copyright belongs to the person who did, usually the tattoo artist. Under copyright law, this means that they are entitled to any royalties every time the image of the tattoo is reproduced.

It gets even more complicated than this.

If you designed the tattoo yourself, then you own the copyright, as the artist simply tattooed your design onto your skin. However, if you commission a tattoo artist to create a custom design for you using your own ideas, the copyright ownership is unclear. It is likely that it would be joint ownership based on previous cases relating to other types of art.

The Evidence So Far

This issue has been brought to light because of celebrities, mainly sports stars, whose images are often used in advertising and video games. This means that the tattoo artist’s work is being reproduced without permission, and technically they are entitled to royalties. This was tested in court in the US in 2012 when martial artist Carlos Condit’s tattoo was featured in a computer game. The tattoo artist sued the game manufacturer and won, receiving $22,500. However, if the company hadn’t gone bankrupt, he would have been entitled to $4.16 million.

Another high profile case was when tattoo artist Victor Whitmill, who created Mike Tyson’s distinctive facial tattoo, took legal action against the producers of the film The Hangover Part II, as the film showed a very similar image being tattooed onto the face of one of the actors. Although the case was ultimately settled out of court, the judge sided with the tattoo artist, saying he had a “strong likelihood of prevailing on the merits for copyright infringement”.

Cases like these make a strong argument for celebrities asking for assignment of all rights to their tattoos. Tattoo artists should consider what rights they are willing to give up and make sure they have legal protection in place.

How Could it Affect You?

As all the publicity surrounding this issue has been based around celebrities, it’s easy to think it’s not relevant for anyone else. However, the same laws apply to all of us. These days we all reveal more and more about ourselves online. If you post a picture of your tattoo on social media, and you didn’t design it yourself, technically you are infringing the tattoo artist’s copyright, as someone else could see your picture online and get a copy of your tattoo done by someone else.

If you want to be absolutely sure that you’re not infringing anyone’s copyright, you would have to design your tattoo yourself, or check with the studio before you get a tattoo to make sure they own the rights.

However, the majority of tattoo artists don’t see it that way. “The customer owns the tattoo, in my opinion,” says Mo Coppoletta, founder of the Family Business Tattoo Studio in London. “The world of tattooing is so influenced by itself that you don’t even know who the originator is. Are you going to copyright a skull? Or a rose? No one owns somebody else’s body.”

Until the law is clearer on who owns your tattoo and what you’re allowed to do with it, it would seem there isn’t too much to worry about. Unless, that is, you’re planning on becoming famous anytime soon 🙂