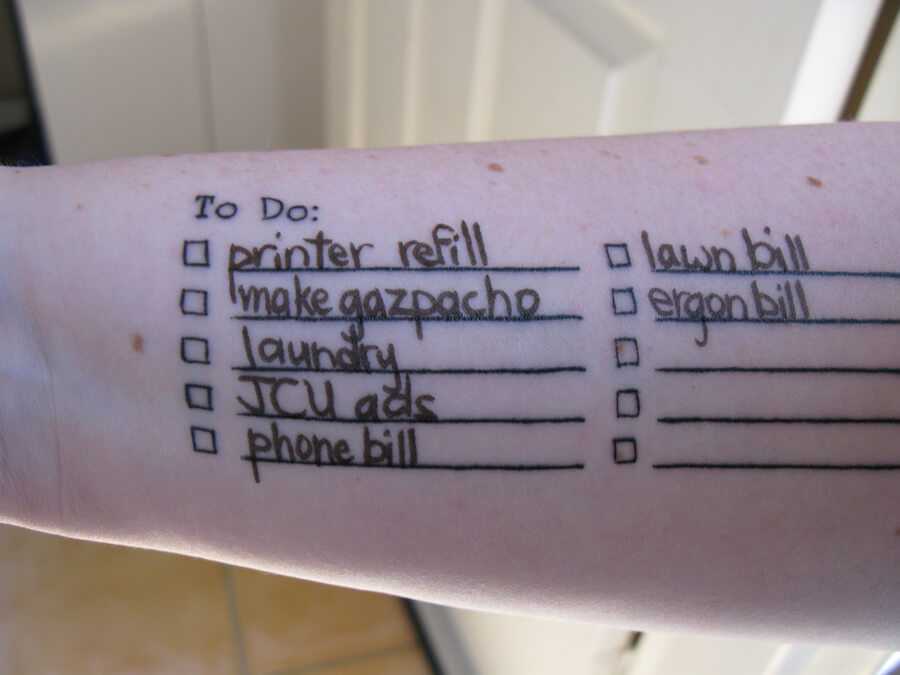 10 of the Most Unusual Tattoo Requests Revealed by Tattoo Artists

Being a tattoo artist is always a fascinating job, but some days are that bit more interesting than others! Tattoo artists from around the world recently took to Reddit to share their stories about the strangest tattoo requests they’ve ever had. Here are ten of the best.

Would you ever get a tattoo you didn’t understand? A friend of one Reddit user did just that, when he went to a Chinese tattoo artist and asked him to write something clever and not tell him what it meant. However, the tattoo also came with a surprise bonus, as the client found out the next time he went to order Chinese food. “His waitress laughs her face off and brings him the bill with a huge discount. He tells her the story and asks her what it says since he doesn’t know. ‘50% off Chinese food,’ she replies.”

Two friends spent a whole day drinking in a hotel room when their car broke down on a road trip. They ended up deciding to get tattoos to remember the experience and asked the hotel barman to make suggestions. “My friend now has a tow truck towing a coffee pot and some words of wisdom regarding a small town in Iowa gracing one of his legs, just above the kneecap.”

“I have a friend who got a tattoo of a nightclub name on his bottom. It began with a hashtag, and he gets free entry for life,” reveals MichaelMoore92. “He’s the only guy I know who shows his a**e to the bouncers and instead of getting kicked out, he gets let in free.” Sometimes it pays to be cheeky!

Some tattoo requests are just too rare! Like this one shared by WanderingWindward:

“My artist had a drunk guy come in that wanted a raw t-bone steak on one pec.” After some misgivings, the tattoo artist decided to go ahead. “It’s exactly as described, just a big photo-realistic raw T-bone steak, like what you’d buy in a grocery store.” Tasty.

If you’re ever considering a tattoo as a forfeit for losing a bet, this tale from Jazzymoose should make you think twice! “I lost a bet, ended up with a penis on a surf board tattooed to my butt,” she explains. Enough said.

6. You’re never too old for ink

This amazing story from lunar_w0lf teaches us that we should never stereotype the elderly! “There was an 85 year old woman who came into my tattoo artists shop, saying exactly ‘I WANT A F*****G SKULL WITH F*****G DAGGERS AND FIRE’ and now she’s an 85 year old grandma with skull and daggers on her chest.”

A partner’s name is the classic tattoo mistake. But how many times would you be prepared to get it wrong? Tattoo artist LaTatuaje shared this story: “I’ve tattooed a guy’s current wife’s name on him, in the same session covered up his previous wife’s name, and he also showed me another different previous wife’s name he had on him. He didn’t want to cover that one though, she must have not been that bad.”

8. It doesn’t always add up

Some people actually want you to make mistakes with their tattoos! Bettyrose91 discovered this when an 18-year-old exchange student visited her tattoo studio. “He asked for a maths equation on his foot. He wanted 3+4=8. I cautiously asked that he knew that was the incorrect answer to the equation. His response was ‘Oh yeah I know, I just think it’d make a funny tattoo’.” Sometimes you really can’t predict people’s answers.

We’ve all got items of clothing we love. But would you go so far as getting it tattooed permanently onto your body? One tattoo artist was confronted with “a guy who wanted a solid bright blue ‘speedo’ tattooed on. Over every square inch that a speedo would cover.” Apparently it was a bit awkward, but no request has fazed him since!

Warning all males! After reading this tale from tattoo artist Dormantgoose, the next time you visit the mens room you may opt for the toilet cubicle instead of the urinals!

“This older gent (easily in his 80s) comes to the front desk and stumbles into his request, ‘Now i’m not here to offend you, or to make light of the wonderful work you do, but i do have a strange ask for you.’, he states, ‘So, i was watching this young chap take a piss the other day, and he had just the most beautiful bee tattooed on the head of his penis, and i wanted to request to have the exact same bee tattooed on my penis.’ Slightly taken aback and slightly amused, I tell him that we can definitely do that, but that there are extra costs involved. Once i told him the price, he almost fell over, didn’t respond and mumbled his way out of the shop!”

Are you a tattoo artist with some unusual stories? Please get in touch, we’d love to share them!