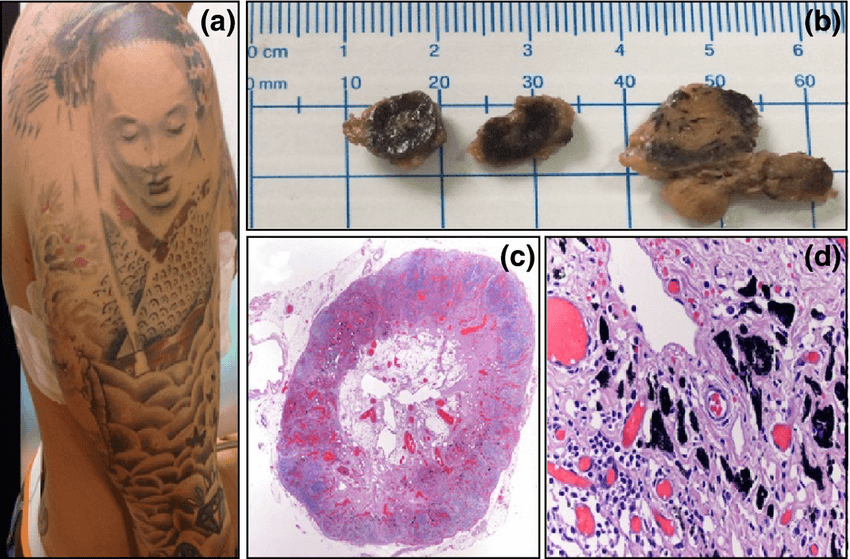 Whilst that old tattoo of Pikachu or a former lover’s name can be removed from sight, it has been found that microscopic remnants of the artwork could remain inside the body.

The tiny particles originating in the tattoo ink can be more stubborn than previously thought, moving deeper within the system and taking up residence in lymph nodes, which are crucial areas of the immune system.

Whilst totally invisible to the naked eye, measuring as small as a few billionths of a centimetre, these particles may still pack a punch. This is because they contain metal-based molecules from preservatives and contaminants, which could potentially lead to adverse effects, such as inflammation.

Where has this information come from?

The recent study by the journal Scientific Reports suggests that the chemical composition of ink colours should be checked before administration. The alternative is that these nano-particles may deposit themselves in the lymph nodes, which are located in the neck, under the arms and around the groin.

What does this mean?

Tattoo inks contain a large quantity of titanium oxide, a potentially toxic white pigment used to create specific shades when mixed with other colours. Meanwhile, the black pigment might be problematic too, with the British Journal of Dermatology stating that some nanoparticles can cause nerve damage and toxic effects in the brain. Suddenly, getting inked comes with more factors to consider than just the right design and where to display it.

Up until now, the skill of the tattoo specialist, safety of their environment and cleanliness of the equipment have been top priorities for most people getting a tattoo. However, even the most professional and high quality studio could use fluids that until recently were deemed safe, so those looking to get a tattoo should check all of the factors before going ahead.

Is there a real danger?

Something to bear in mind is that whilst there has been a lot of coverage on this study, one newspaper in particular made wild claims that simply have no backing. If you’ve read that titanium is directly linked to cancer, this is only the case when inhaled, which of course does not apply to the tattoo industry.

It is also important to note that this study is still in its infancy, with only six bodies used for tissue samples, and all of them deceased. Additionally, little information was supplied on the lifestyles of the individuals. However, these findings will prove critical to the future investigation into whether tattoo inks cause lasting damage to the body.

The results in a nutshell

Understandably, this study has sparked conversation on Reddit. Many are asking the online community for input, which is where user Ur_crumbelievable stepped in. Don’t be fooled by the funny name, as this individual is a pathologist with some interesting insight on the presence of pigment in lymph nodes:

“It can be from a number of things (exogenous pigment from tattoos, heavy metal particles from prostheses, anthracotic pigment in smokers and also from inhaling pollution, melanin from various skin conditions, etc).”

So whilst tattoos could very well be the culprit, other lifestyle choices and environmental factors can be just as much to blame.

Whilst this study is far from definitive, it does offer food for thought. If you’re ‘umming’ and ‘ahhing’ over getting a tattoo or know someone who’s considering one, first have a think about this newly released information.

Whilst Andrea Catton Laser Clinic can remove a tattoo from the skin, the lymph nodes are a different matter entirely. Always make choices like this responsibly, and seek further advice if you’re unsure of anything.