Acne scars are more than skin deep. They can fuel depression and anxiety, and living with them can often be a daily battle with one’s self-esteem. Depression in particular is common with acne scars, and although the two don’t always go hand-in-hand, it’s very easy for somebody with acne scars to feel intense feelings that can make them become socially withdrawn, and secluded.

If you have acne scars, the good news is that there are effective treatments available to treat acne scars – no matter the severity of them, if they are affecting your quality of living.

In this article, we’ll be taking a look at the two most effective laser treatments available; PicoSure and RevLite. Laser treatments are recommended when treating scars because they are non-surgical and non-invasive, and they are clinically proven to reduce scarring. It’s important to consider, however, that you can’t ‘remove’ acne scarring in the same way that you can remove a thorn from your foot; it takes time to treat acne scarring, although such is the brilliance of laser treatments that results are often seen within just 48-hours. 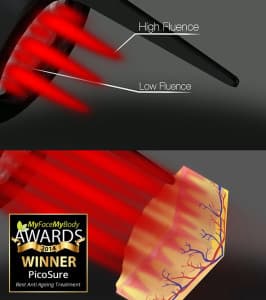 PicoSure laser treatments are considered to be the best available. Studies have shown that PicoSure is extremely effective when treating acne scars, with 77% of patients in one study achieving greater than 50% improvements with acne scaring.

So how does PicoSure work? Quite simply, PicoSure breaks up acne scars without damaging the surrounding area using a dual photothermal process and a photomechanical process, in a technology called PressureWave. It’s quick and gentle, with only 10% of the skin penetrated by ultra-short pulses of energy in trillionths of a second resulting in increased density and length of elastin fibres and increased collagen deposition

The remaining 90% of the skin is treated with a lower-fluence laser burst. This laser burst penetrates deep into the skin, triggering an automatic immune response in the body. The body’s natural reaction is to heal itself, and that’s what we want – we want the body to restore normal skin elasticity in the scar tissue and thus, reduce the appearance of the scar.

Like PicoSure, RevLite is a laser treatment, but it uses different technology.

RevLite uses Q-switched laser technology. Q-switch technology works as a high speed shutter, for the laser to achieve nanosecond pulse widths. Energy is stored between pulses, and this allows the RevLite laser to produce a high power output. This process is known as PhotoAcoustic Technology Pulse, or PTP for short.

Despite utilising different technology to PicoSure, how RevLite actually goes about removing and treating acne scars is similar.

Each pulse heats the skin and damages the areas targeted. This triggers an automatic immune response in the skin and the body’s natural reaction is to repair itself. But because RevLite has targeted the areas of the skin that cause the scarring to appear rough and uneven, the new collagen the body makes ‘plumps up’ the atrophic pits in the skin making it much smoother than before. The result is acne scarring that’s far less visible than it was prior to treatment.

Studies have confirmed that RevLite is extremely effective in the treatment of acne scars, and our own acne scar patients have seen incredible results in a relatively short space of time with this laser treatment. 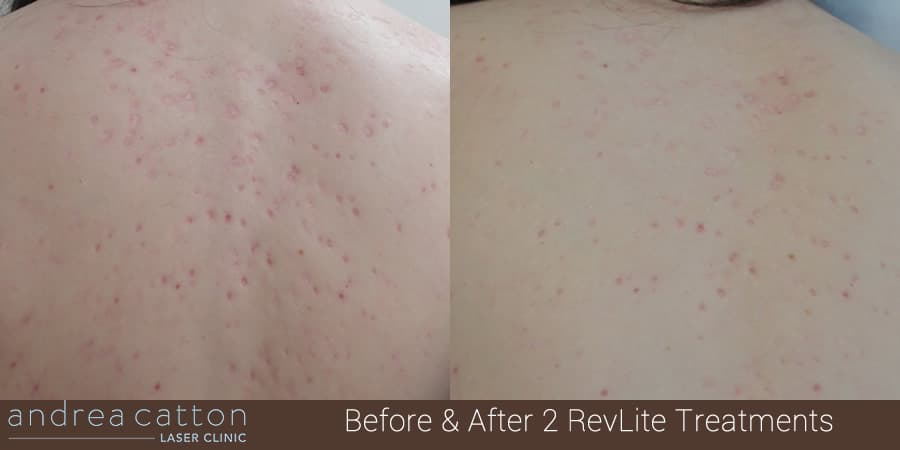 Laser treatment is effective when treating acne scars, because it triggers a natural immune response from the body to heal itself. Both PicoSure and RevLite lasers penetrate deep into the skin so that any repair the body makes goes beyond surface level. Laser treatment also shrinks the glands that produce oil and it promotes collagen and elastin protein production, which are both essential for healthy looking skin.

In the interest of client and staff safety, the clinic is temporarily closed.

We will be able to reopen once the government guidelines allow us to do so.

Should you need to contact us during this time,  please email info@andreacatton.co.uk or text 07722 727094

Please keep you and your families safe and Andrea, Gemma and Carly look forward to seeing you soon.