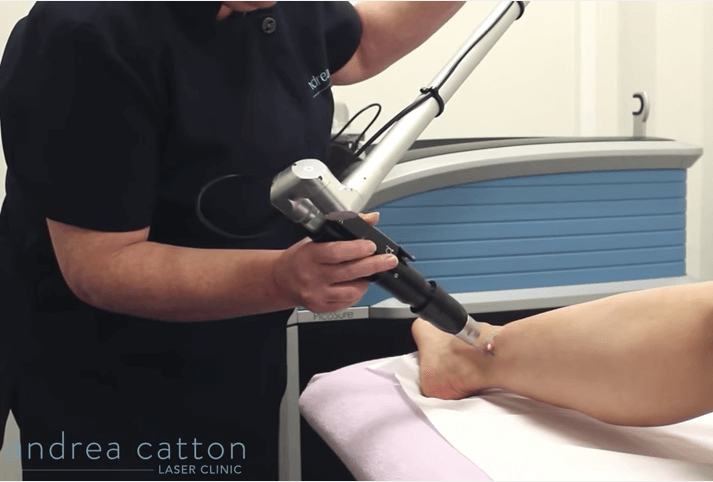 How Does the PicoSure Laser Work to Remove Tattoos?

According to the British Association of Dermatologists, one third of the population who get tattoos end up regretting them – with men more likely to regret their choices than women.

For those who remained unhappy with their new body art, the gold standard for removing tattoos was traditionally Q-Switched lasers with nanosecond (one billionth of a second) pulse durations. However, clinical research has found that the PicoSure laser with picosecond (one trillionth of a second in length) pulse durations can get rid of unwanted tattoos faster than ever before.

So how exactly does the PicoSure laser work to remove tattoos, and how can we be so sure that it’s the best option available on the market today?

Before we get into the science of how PicoSure works to eliminate tattoo pigments, let’s look at it from a simpler point of view.

PicoSure is an FDA-approved technology that uses incredibly short laser pulses (one trillionth of a second in length), to hit the ink particle beneath the skin with such a huge amount of pressure, that the pigment shatters into minuscule dust-like particles. These are then absorbed by the immune system and eliminated by the body.

Compared to traditional lasers using nanosecond technology, PicoSure is often regarded to be more effective on stubborn tattoos, and can require fewer treatments to achieve a complete, finished result. We’ll cover the evidence on this later on the post.

Today, PicoSure lasers are regarded by experts to be the “gold-standard” solution for removing tattoo pigments quickly and effectively, using picosecond pulses. The PicoSure is an “Alexandrite Laser”, which means it can produce a specific light wavelength within the infrared spectrum of 755nm.

The PicoSure laser utilises shorter wavelengths known as Pressure WaveTM, which penetrate less than longer wavelength in biological tissue, creating a photo-mediated and light-chromophore interaction referred to as the “photo-acoustic effect”. This effect allows for the absorption of optical radiation which generates sound, produced when extremely intense laser pulses of around 100 million W/cm2 are delivered in very short amount of time (within billionths of a second). These pulses promote high temperatures above 300 degrees within certain chromophores – such as the particles in tattoo ink. 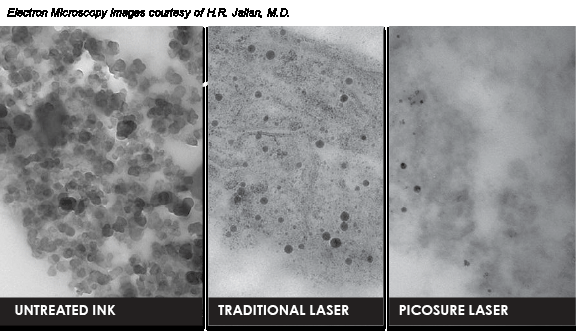 The nature of PicoSure lasers allow for absorption of wave pulses that generate a confined, precise, and quick photo-thermal effect within a specifically targeted area – alongside ultra-structural and intrinsic chemical modifications in association with rapid changes in volume. By passing these waves through the skin in the area of the tattoo, the PicoSure laser fractures ink particles – leading to chemical and structural changes in the skin.

The water within the cells that contain pigments reach boiling temperatures and rapidly explode, allowing the particles to breakdown and seep into other dermal structures. Once the pigments are broken down, they can be consumed by the local lymphatic system, which allows them to be eliminated through a trans-epidermal extrusion.

PicoSure has a 75% or greater chance of clearing unwanted pigments after a single treatment – and PicoSure Boost allows the technician using the laser to carefully adjust the pressure, changing the output energy. This process results in a smaller pulse width, which enhances the rate at which ink can be shattered within the dermis – making the PicoBoost more effective than many standard lasers. 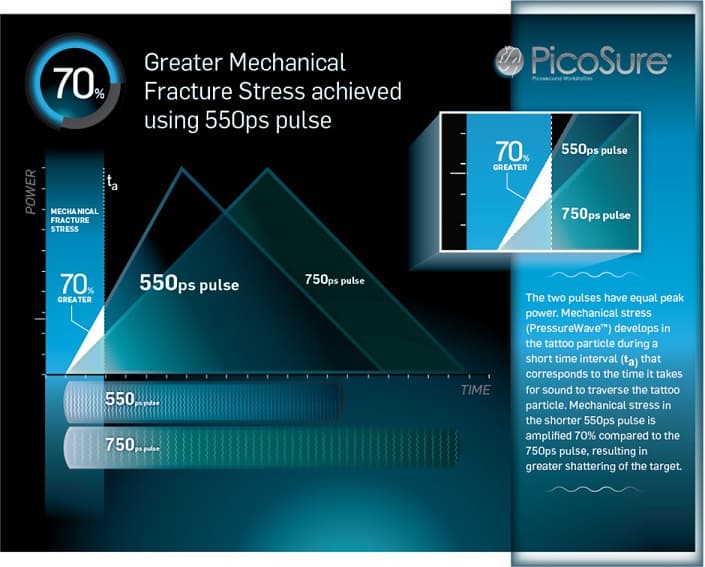 The PicoSure Boost also permits technicians to magnify the pressure of the laser by 70%, while shortening the pulse width in order to remove pigment more accurately, and get rid of stubborn tattoos in a shorter amount of time.

The upgraded technology comes as a result of research undertaken by Cynosure, the manufacturers of the PicoSure, who discovered a dramatic reduction in the density of ink which is treated using shorter pulse durations. Analysis found that a shorter pulse width of 500ps offered a 4 times increase of pressure on ink particles. As a result, the PicoSure Boost has a width reduced from 750ps to 550ps for 70% increased pressure.

But can the PicoSure laser Treat all ink Colours?

Until recently, PicoSure lasers have been less effective at removing yellow, orange, and red tattoo ink when compared to our RevLite Q-Switched Nd:YAG laser. However, the PicoSure laser is now capable of a lot more.

The new 523nm system upgrade delivers ultra-short bursts of energy to improve the removal of orange, red, and yellow tattoo ink. When combined with the standard 755nm laser offered by PicoSure, the new system offers an unparalleled level of clearance throughout the colour spectrum for a range of skin types. 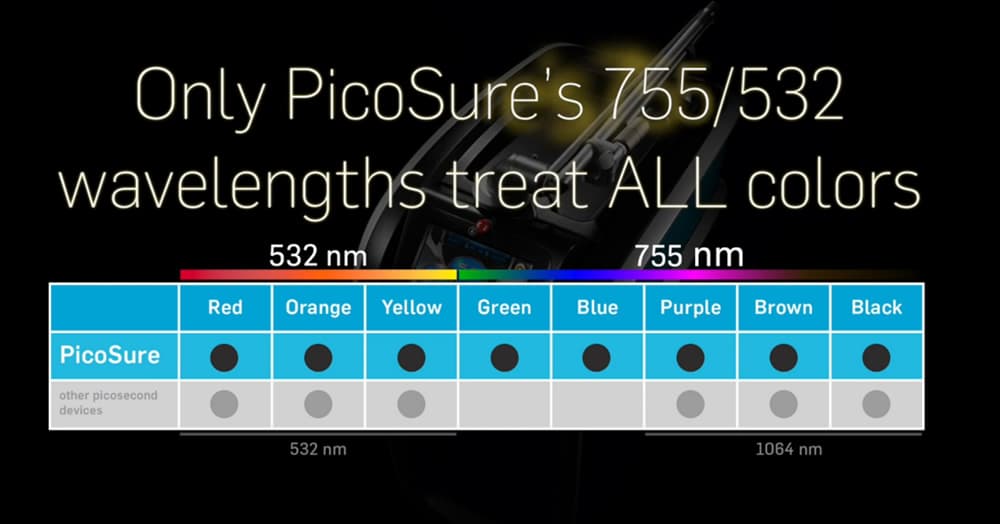 The PicoSure technology proves that tattoo removal tech has improved significantly over the years. Research and various clinical studies have proven that the picosecond 755-nm alexandrite laser is a safe and very effective device for tattoo removal and seems to clear pigment in tattoos more rapidly than QS lasers.

For a closer look at just some of the clinical trials that have taken place to prove the effectiveness of the PicoSure & picosecond laser for tattoo removal, simply read some of the case studies here: https://www.andreacatton.co.uk/2016/06/9-studies-effectiveness-picosecond-laser-tattoo-removal/.

We’ve seen first-hand the effectiveness of the PicoSure laser, and have obtained testimonials and interviews from a range of happy customers. For instance, Melanie – a 28-year-old mother of one, approached us with the aim to remove a tattoo from her upper arm with the PicoSure laser. After four treatments, the tattoo was almost completely invisible. 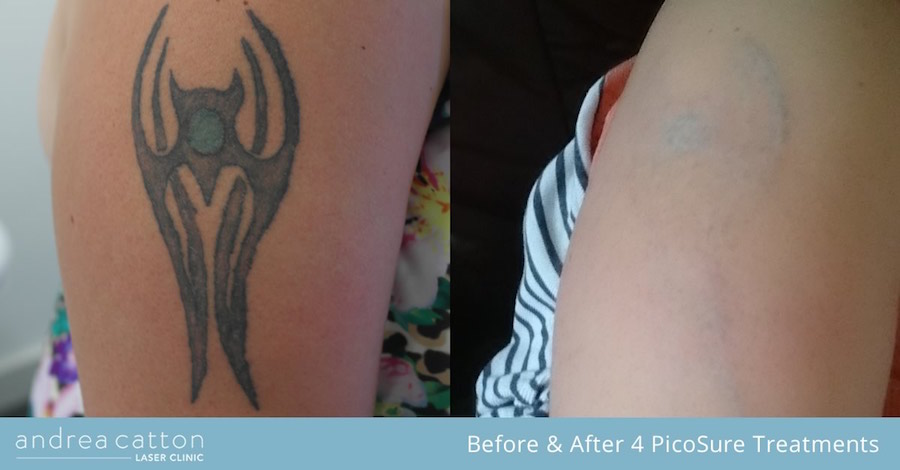 Similarly, Chloe approached us with the aim to remove tattoos from her thigh and lower back with the PicoSure laser, and after four treatments, the results were incredible. 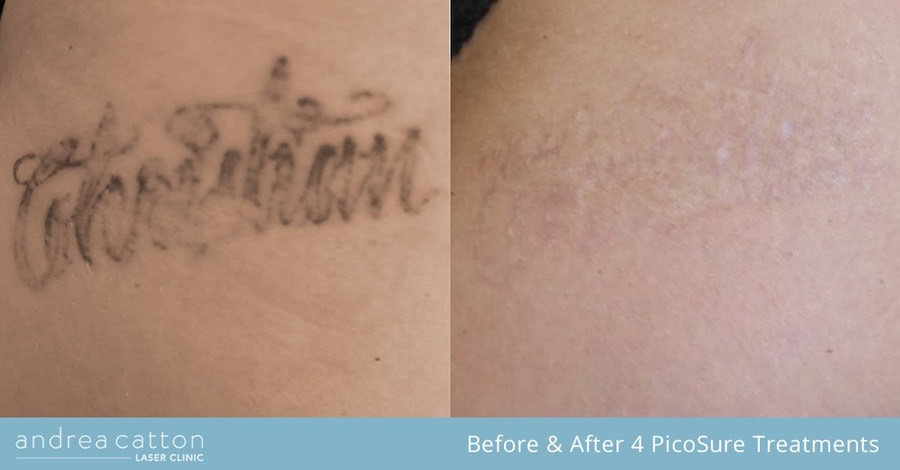 Yes, it may be more expensive than traditional Q-Switched lasers, but the happy testimonials of customers who have undergone PicoSure treatment simply go to support the clinical trials and research that proves PicoSure to be the best technology available in the world when it comes to removing unwanted tattoos quickly, and effectively.

If you would like more information on PicoSure laser tattoo removal then don’t hesitate to get in touch via our contact form or by phone on 01282 421174.